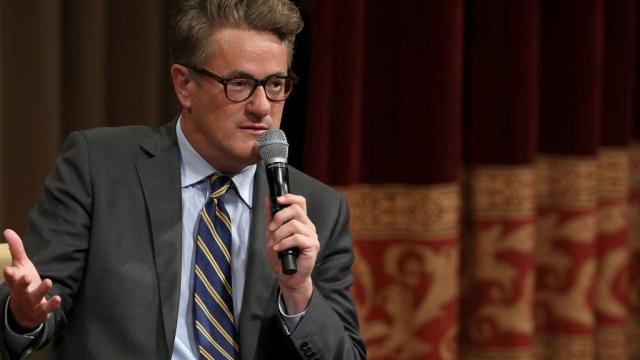 "Morning Joe" is in mourning. The deceased is the Republican Party of balanced budgets and international restraint.

MSNBC host and former Congressman Joe Scarborough announced last week that he was leaving the Republican Party. In an impassioned piece for The Washington Post, Scarborough cited Donald Trump’s actions and Republican Party leadership’s silence as the basis of his decision:

“The wreckage visited of this man will break the Republican Party into pieces — and lead to the election of independent thinkers no longer tethered to the tired dogmas of the polarized past. When that day mercifully arrives, the two-party duopoly that has strangled American politics for almost two centuries will finally come to an end. And Washington just may begin to work again.”

Welcome to the (anti-) party, Scarborough! You are joining the roughly 45 percent of Americans who are abandoning the Democratic and Republican Parties or never joined them in the first place. Not only are our ranks growing, but political scientists and pollsters are finally acknowledging that independents are not apathetic fence-sitters but engaged Americans concerned about how the parties and partisanship are ruining our country.

But if I’ve learned anything about American politics in my 20 years as an independent activist and advocate for electoral reform, it’s that nothing automatically leads to anything. There are no straight lines in politics. Change is not inevitable. The parties work hard to muffle the impact of this exodus towards independence. Independent voters might comprise 45 percent of the country, but the parties still make the rules. And here’s rule No. 1: Independent voters must accept that they are second-class citizens in our democracy.

Independent voters in many states cannot register to vote as independents — they must choose from derogatory voter registration language like “unenrolled” or “decline to state.” Independent voters are not allowed to serve as poll workers in states like New York — it’s a job only Democrats and Republicans can apply for. Independent candidates are locked out of participating in the presidential debates and have to gather many more signatures than party candidates to have their names appear on the ballot.

Independents in dozens of states pay taxes for primary elections that they are barred from. The two forms of gerrymandering that dominate our country — partisan gerrymandering and bi-partisan gerrymandering — share a common commitment to protecting the parties at the expense of the voters, especially independents. The Federal Election Commission is comprised of three Democrats and three Republicans — which guarantees deadlock — instead of two Democrats, two Republicans, and two independents, which the current statute allows for and would produce functional oversight of the electoral process. Local and state boards of elections are run by Democratic and Republican appointees.

We do need to elect independent thinkers no longer tethered to tired dogmas, as Scarborough suggests. That is true. And we need to free independent voters from the iron maiden of partisan election laws and practices that keep them from fully participating.

Implementing open primaries is where I start. It’s simple and popular. Let all voters vote in all elections. Don’t make party membership a condition for participation. Don’t let the parties — private, non-government organizations — decide who can and cannot vote in publicly funded elections. If we can break down this barrier, the American people will be better positioned to take on the dozens of other ways the parties hold on to old dogmas and insulate themselves from independent voices, from change and from progress.

My hope is that Scarborough takes his independence seriously and uses his location in the media to publicize the growing chorus of voices calling for the full enfranchisement of independent voters. While just five years ago the conversation about reform was limited to money in politics, there is a surge of new leaders and organizations who recognize that the party control of the process itself must be disrupted. There are hundreds of articulate, passionate, committed and accomplished independent leaders and reformers working around the clock to reform our political system. The country needs more opportunities to hear from them!

Don’t mourn Joe. Join the fight to unleash the power of independents.