America needs to get rid of closed primaries

This editorial was published by The Independent Florida Alligator

As we’re sure you are aware, Florida is a closed primary state. This means that in order to vote in a primary election, Florida residents must be registered with a political party. It also means in the primaries, they are only be able to vote for candidates running for a position within their registered party. In general elections, however, they are able to vote for any candidate in any party.

In our opinion, closed primary states need to be brought to an end. Not only are they restrictive and suppressive, but they further divide our nation by strengthening party identification.

When voters are forced to decide on a party to affiliate themselves with, they become attached to that party. Of course, they do have the free will to vote for whoever they chose to in the general election, but registering as one party or another does tend to cause most voters to develop a mentality that influences the way that they vote. This bond people start to feel with their party has the power to influence voting patterns and impact overall election results.

Many people who are voting for the first time don’t know much about politics. Thus, they often don’t know much about political parties or which one aligns most with their beliefs. A lot of the time they end up choosing a party for the wrong reasons. It might be because their parents, significant other or friend support that party. Either way, these voters are commonly not thinking independently.

When a young person is just starting to explore the world of politics, they should be able to do so free of ties and regulations. They should be able to consider themselves an independent or bipartisan and still have the right to vote in a primary election. By forcing them to identify with a particular party, they lose the right to vote for candidates across the board they may want to support. Instead, they vote only from the percentage of candidates they are allowed to vote for.

What’s more is sometimes even voting veterans, young people and adults who are well versed in politics, still aren’t exactly sure where they lie on the political spectrum. For many people, casting a vote is about a person, not a party. Plenty of well-educated voters find themselves falling somewhere in the middle. Denying these holistic thinkers the right to vote for candidates they wish to support in the primary election is not only suppressive but unjust.

In addition to these restrictions closed primaries put on voting freedoms, these regulations also further divide our already disconnected nation.

As mentioned before, when voters are forced to identify with a specific party, they often become more attached to that party. They think of themselves as a Republican, a Democrat or a third party. Not as an independent thinker.

Even if you are registered with a party that you don't feel strong ties to, you often can’t help but get offended when you see a social media post calling your party ignorant. You can’t help but become angry when your distant relative rants about your party at the Thanksgiving dinner table. No matter the strength of your ties, you still become upset when someone challenges a part of who you are.

Especially after this last election cycle, people have been clinging to their party ties. Americans become more divided every day and closed primaries are only working to further separate us from our fellow citizens.

While seeing an end to closed primaries is not the only solution our country needs to come together again, it is certainly a good start toward a more connected and tolerant country.

We’re excited to announce that we’re going to be using CivNet, a New Mexico-based online network for community action, for a lot of our ongoing communication. One of NMOP’s values is to strive for a dialogue from every political persuasion. In that vein, CivNet provides an open platform for community members to connect with diverse individuals who come together on these important political process reform issues, find opportunities to get involved, and organize to take action.  We are going to be leading A LOT of action over the next 6 months as we approach the next legislative session.

This will also allow us to better assess who wants to be active with our organization and who wants just occasional updates.  We will continue to send out email through this list, but if you’d like to get engaged on a more regular basis and learn more about what NMOP is working on regularly, please sign up for CivNet and join the NM Open Primaries Project on CivNet. If you have any questions, feel free to email help@civnet.com or you can learn more at www.civnet.com.

NMOP Media Update for May 2017

New Mexico Open Primaries continues to attract state-wide,and national, media attention with the progress we have made - educating New Mexicans and our leaders about the need for structural political reform:

Please take a moment to read the pieces linked below and share these them through email and social media:spread the word - we're making progress and change is coming

This piece published by Now Associations: How One Advocacy Group Is Making The Case For Open Primaries in New Mexico

Make sure to Click on this link for this piece - Nonprofit Group Pushes for Open Primary Elections - which appeared in the Farmington Daily Times above the fold.

Follow the link HERE for the CALL TO ACTION PDF 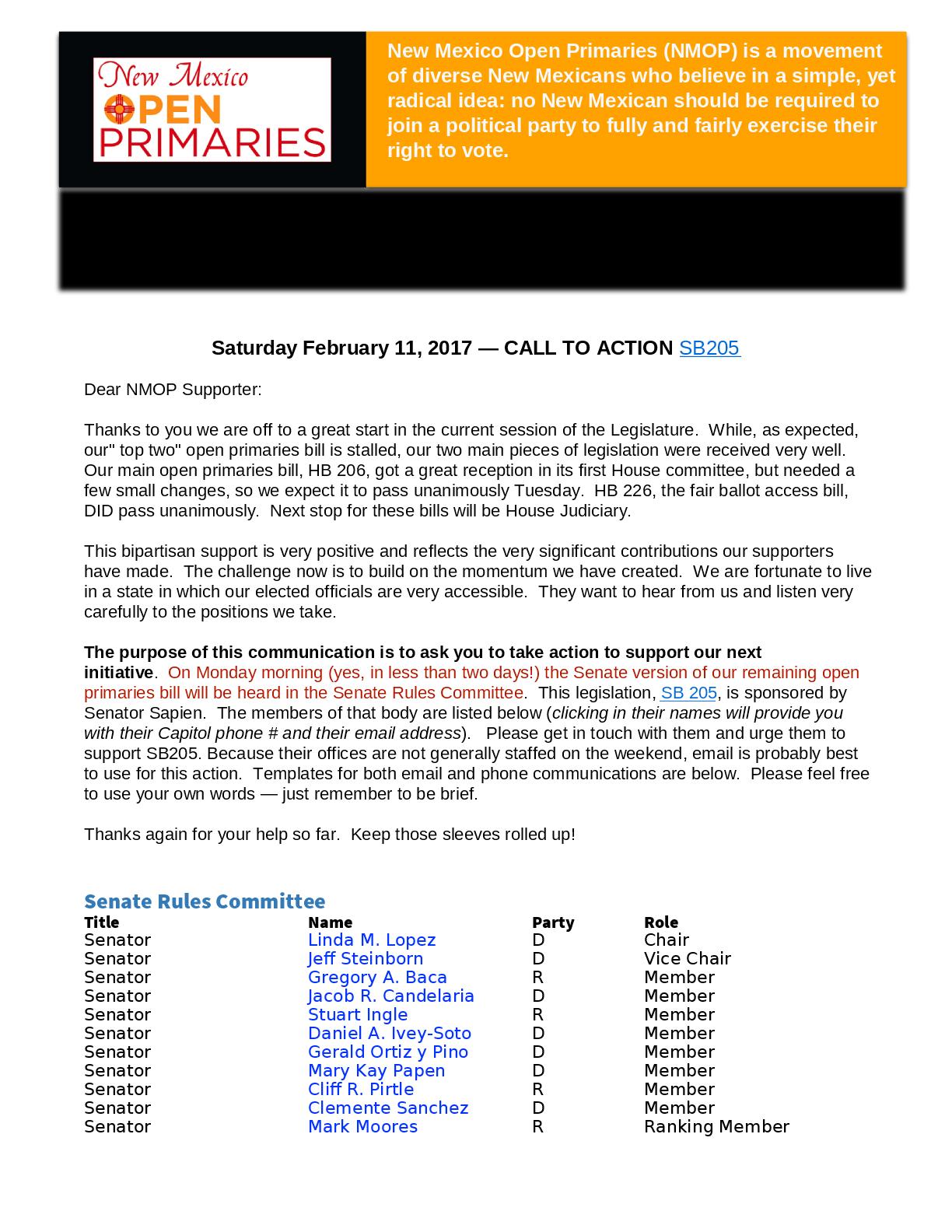 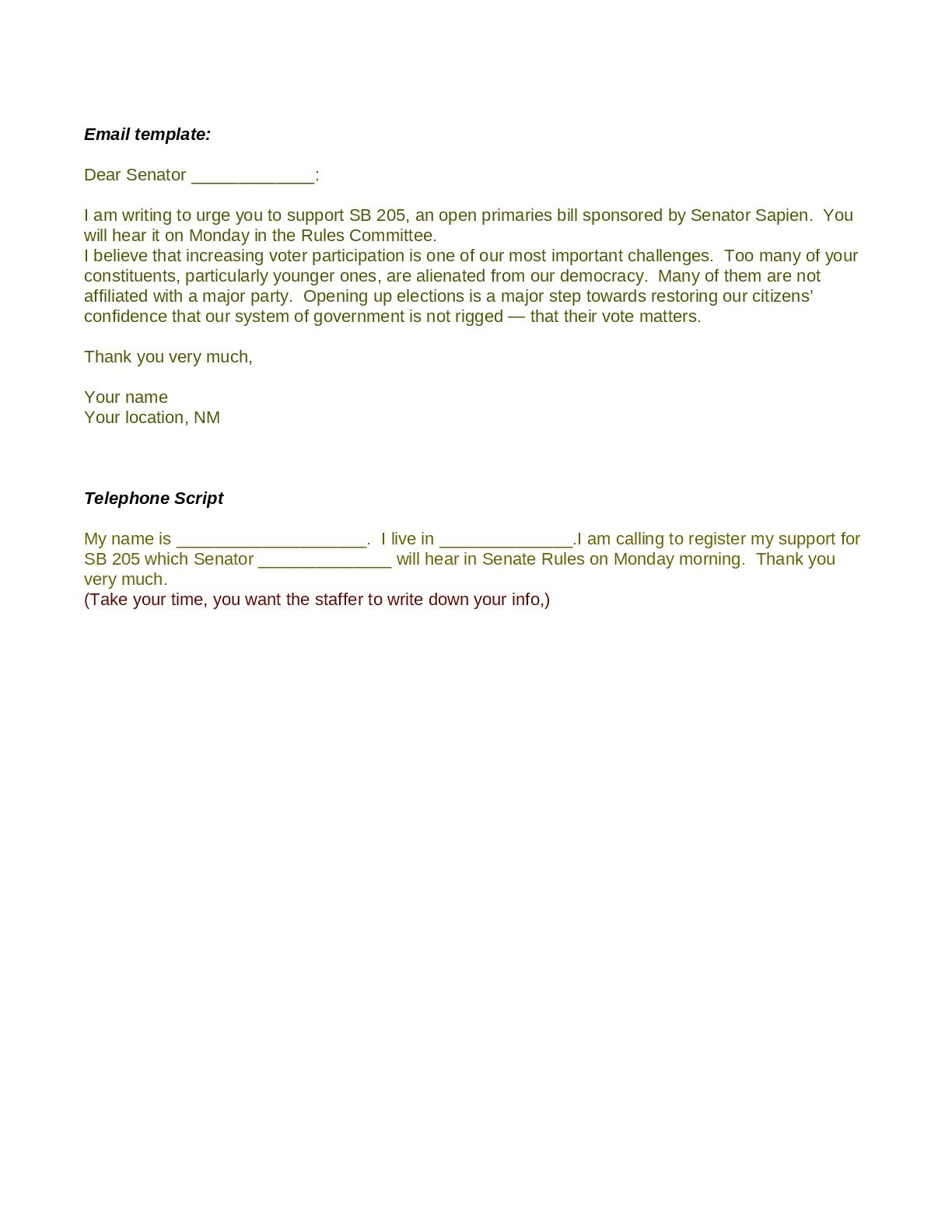 Things you can do:

Click HERE for a table containing the complete survey results.

Thank you for your support of NMOP.  We welcome your input and suggestions and of course your financial support. You can find us here.

Bob Perls and the NMOP Board

The court date for our independent candidate ballot access challenge is September 2 at 3 pm in District Court in Santa Fe. Founder Bob Perls will be there and if allowed, will testify.
Thanks so much to Rod Frechette for filing and being the attorney, all pro bono!
Court challenges are not exciting, but in a state without citizen ballot initiative and referendum, we must rely on the courts to push the legislature forward so that we have competitive elections. Making ballot access fair to all candidates is just one of a number of reforms New Mexico Open Primaries is dedicated to.

To ensure that every voter has equal protection and opportunity under the law to vote in every election.

1) Adopt Open Primaries where all voters can vote in all elections without joining a political party;

2) Create competitive elections all the time through the adoption of independent re-districting commissions as well as fair and equal ballot access requirements for all candidates;

5) Increase voter engagement and confidence in our government by educating voters how these reforms improve legislative performance.

NMOP believes that we must reduce the discriminatory ballot access requirements of independent and third party candidates to offer more choices for NM voters. With the help of a dozen or so volunteers, Bob Perls turned in 1350 signatures for the PRC District 1 race to the Secretary of State’s office last Thursday so that he has standing to sue in state District Court so that future non-aligned candidates can run and NOT have to collect 3-10 times the number of signatures as major party candidates to get on the ballot. To qualify Bob would have had to turn in 3650 signatures. Rod Frechette is handling the case and we are deeply appreciative of this pro bono work.

NMOP will continue to offer financial and people power to help all independent candidates in an effort to make all elections more competitive. 70 percent of all NM elections have NO competition and democracy suffers. Court challenges will be an ongoing part of our strategy.

Please donate to support the ongoing cost of this court challenge. We file July 15 and the case should be heard in August.

Here is a link to the PDF of the following Albuquerque Journal Article:

Former state Rep. Bob Perls was rejected this week by the secretary of state as an independent candidate for the Public Regulation Commission and says he’s going to challenge it.

Perls will ask a state District Court to strike down New Mexico’s “unfair and discriminatory” requirements for independent and minor party candidates to get on the ballot.

The Corrales businessman and former foreign service officer with the U.S. Department of State says he turned in about 1,350 voters’ signatures to qualify for the Nov. 8 general election ballot. The requirement for an independent, however, is 3,650.

Perls says that if he were a Democrat (which he was when he served in the House in the ’90s), he would have had to submit about 750 signatures, and if he were a Republican, about 450.

Right now, there is only one candidate on the ballot in Albuquerque’s PRC District 1, Democrat Cynthia Hall.

MINOR PARTIES: The secretary of state, following last week’s filing deadline, has qualified a couple of new minor political parties that could nominate presidential candidates for the Nov. 8 ballot.

The Party for Socialism and Liberation is running Gloria La Riva of San Francisco, who was born and raised in Albuquerque, as its presidential candidate. La Riva has previously been the party’s presidential nominee and has run for governor in California on the Peace and Freedom Party ticket.

Minor parties have until Sept. 13 to submit their nominees to the secretary of state.

Also qualified this week as a minor party was the American Delta Party, which according to Ballot Access News was founded by San Diego businessman Roque “Rocky” De La Fuente as a vehicle for a possible independent presidential bid. De La Fuente ran in some states in the Democratic presidential primaries.

Four other minor parties already were qualified in New Mexico, including the Constitution Party, whose presidential nominee, Darrell Castle, is on the ballot in November. Former Gov. Gary Johnson is expected to be on the ballot for the Libertarian Party. LEGISLATURE: On the legislative side, Fran Gallegos was disqualified as a Green Party candidate in Senate District 39, where Republican incumbent Ted Barela faces Democratic challenger Liz Stefanics. The secretary of state said she hadn’t been properly nominated by the party. In House District 54, independent Freddie Joe Nichols is newly on the ballot, challenging Republican incumbent James Townsend.

Our Board sent out surveys (download link here)  to all state rep, state senate and congressional candidates with primary election opposition and a summary of the results is posted below.  Please review the results and we hope you vote accordingly.  Many candidates did not respond and if they did not we have to assume they are not supportive of our agenda.  We will do so again for the general election in November.   The results so far are as follows (to download as a spreadsheet click the link here):

This is a link to the first interview NMOP President Bob Perls did with Eddy Aragon  on Rock of Talk 95.9